St Albans finally has a pipe organ. This was a dream pursued by several of our congregation, particularly John Vallance, Raveen Mendis, James Brigden and Guy Cox. Many other churches can tell similar tales of the search for a suitable instrument, and it always seems to take years. In our case, the small size of our historic church was an additional constraint. Finally a suitable instrument turned up. J.P. Eagles was a radiophysicist turned organ builder, and in the 1950s and 1960s produced many organs which were both modestly priced and sized for a small church or chapel. 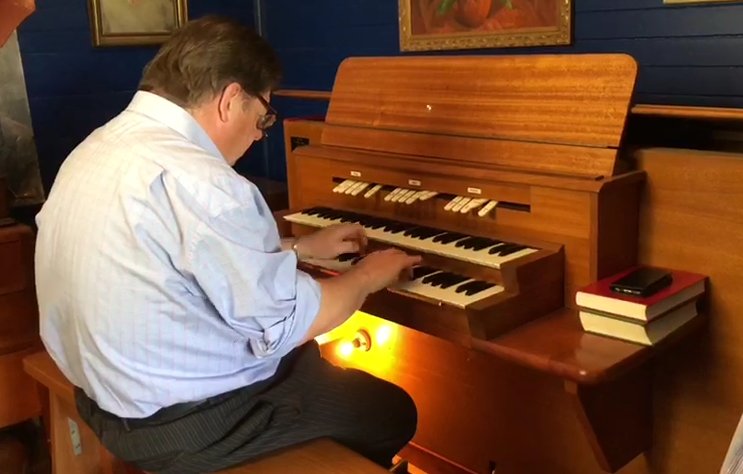 Glenn Amer, the previous owner of our organ, demonstrating its capabilities. Listen to a brief recording here. Thanks to Teresa for filming it. 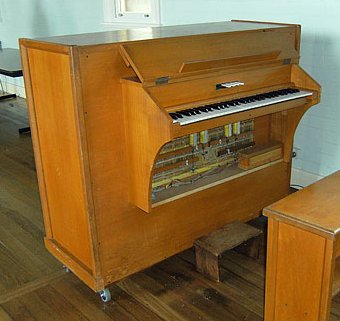 This organ was originally built, in 1968, for the Anglican church at Condobolin. In 1981 it was moved to St John's College, Morpeth. As originally built it had only one manual, no pedals and five speaking stops. The picture on the right shows what it would have originally looked like (organ at St Johns's Woy Woy, now in the church hall). This was a stop-gap for St John's College while they waited for their new organ to be delivered. From there it moved to Campbelltown, where it spent a year in a school. Then things changed - it moved to a private home in Sydney where Andrew Grahame and Graham Wykes made major modifications, adding a second manual and pedal board and increasing the registration to 15 speaking stops. Understand that there are still only two ranks of pipes - stopped wood and open metal - all these stops are generated from combinations.

After that it went to the Poor Clare Nuns at Campbelltown, where it remained from 1987 to 2003. Then the the Poor Clares sold it to Stephen and Alison Dale, who in turn sold it to Glenn Amer in 2016. Glenn decided he needed to declutter (and did he ever need to declutter - he couldn't even open his front door) so the organ became ours in September 2019. We hope we can get Glenn down here to play on 'his' organ sometime soon. For those who come from the North Shore, he is the resident organist at St Peter's, Cremorne. 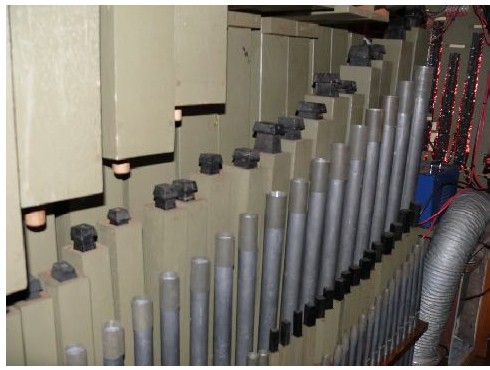 For those who like to see the works, here are the pipes.

The organ was funded by a private donation, no Church money was spent on it. It must also be said that it was a bargain!